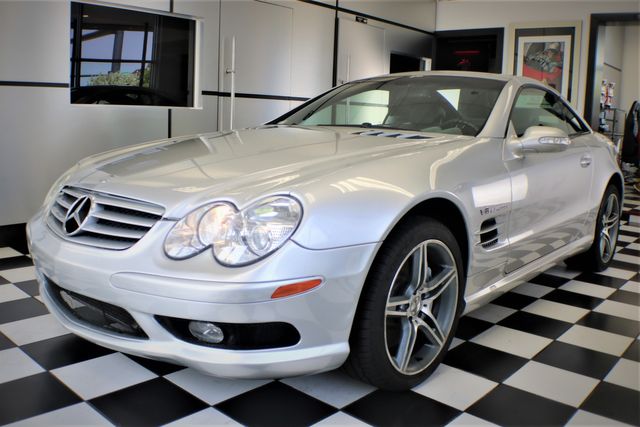 Initially, the 2003 SL series will consist of the SL500 (5.0-liter V8) and the AMG-tweaked SL55 (5.4-liter supercharged V8). The SL55 adds a few upgrades of its own, such as 18-inch alloy wheels, massive brakes with eight-piston front calipers, unique sport seats and instrumentation, lower body sculpting and a quartet of exhaust pipes poking out from the rear valance panel.ssssssssssssssssssssssssssssssssssssssssssssssssss

Several options are available in the SL, such as a Sport package for the SL500 that gives it the look of the SL55 (by way of 18-inch AMG wheels, high-performance tires and lower body sculpting), Parktronic (electronic parking assist), bi-xenon headlamps and even ventilated seats that can massage one's lower back.

With performance stats that include a 0-60 mph sprint of 6.1 seconds and a (electronically limited) top speed of 155 mph, the SL500 can boogie if it wants to. If that's not enough, the 493 horses and 516 lb-ft of torque produced by the SL55's force-fed V8 will slingshot that Benz to 60 mph in just 4.5 seconds. In addition to the increased thrust, the SL55 also has those big wheels and brakes mentioned earlier, performance-tuned suspension, a faster "SpeedShift" automanual gearbox, full dual exhaust, sport seats and special instrumentation.

The latest active and passive safety features are included in the SL series. The more notable features include a slew of acronyms that stand for performance- and safety-enhancing technologies such as ABS (antilock brake system), ASR (traction control), ESP (stability control), ABC (body roll control). And the new SL is the first car to have electronic braking, which replaces the conventional brake pedal-to-hydraulics interface with a sophisticated electronic setup that can react much quicker and even selectively adjust braking force to each wheel when cornering. Should an accident be unavoidable, there's a multitude of airbags to protect the occupants, including side bags that cover the head and torso areas and a knee bag for the driver. As with the previous version, the latest SL has a pop-up roll bar that will deploy if a rollover is imminent.

A power-operated, retractable hardtop, much like that seen in Mercedes' SLK sports car, is standard as is most everything one could want in an automobile. The metal top replaces the old canvas job (with its plastic rear window) and offers the integrity, insulation and security of a coupe when raised. A simpler climate control system debuts, with easy-to-understood knobs and dials that replace the previous unit's annoying array of confusing buttons. A wide choice of exterior colors and interior trims are offered, including four different types of accents for the cabin (three woods and one metallic).

Improved dynamically and functionally, the SL 55 handles better and is more user-friendly than the car it replaces. It's also comfortable, luxurious, faster and packed with the latest technologies and safety equipment. If you're in the market for a luxury roadster, the 2003 SL should be high on your list.